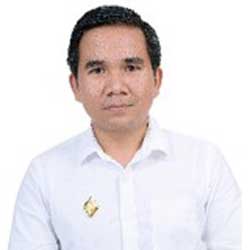 I have a Master Degree in anthropology from Northern Illinois University (NIU), USA, in 2009. Also, I obtained a Master Degree in arts and archaeology from School of Oriental and African Studies, University of London, in 2015. My research focuses on the history of the Khmer Rouge genocidal regime, which claimed nearly two millions lives, between 1975 and 1979. For my thesis at NIU, I deeply researched on the structure of the Khmer Rouge regime in order to find out how orders were issued and followed to arrest and kill people. At the University of London, I wrote a dissertation about how the Cambodian government did to preserve and teach young generation about the past. Between 2009 and 2016, my work focused on training high school history teachers so that they could go back to their classroom to teach secondary school students about the history of the Khmer Rouge regime.

With my thirteen years of experience as a researcher, editor-in-chief, trainer and communicator, I have obtained some remarkably professional achievements. First, in 2006, I was given a letter of appreciation from the US Embassy for my work on the Khmer Rouge history for the justice I sought for Cambodian people through research work. Later, as an editor-in-chief of Searching for the Truth Magazine, I published several stories about missing people during the Khmer Rouge genocidal regime. After I published the stories, some could find and locate their long-lost members. I was praised by several people, who could find their lost members. This could mean a lot to those who reunited with their lost members. Other achievements were that I was awarded scholarships to study in the United States and the United Kingdom. In addition, because of my work in Cambodia, I was invited to join training programs and lecturers several times outside the country.